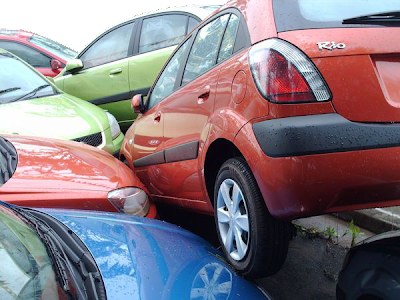 A view of the cars parked in and

An East Hampshire District Council spokesman has demanded an enquiry into a leak at the council following premature use of Petersfield town centre as a giant car park.

Secret discussions have apparently been taking place behind closed doors at the council after it was suggested using the High Street and town square as a ‘giant car park’ for Christmas following the recent loss of Petersfield’s only traffic warden.

The spokesman confirmed: “It would appear that the general public has already been made aware of our plans judging by the number of cars parked in the High St and town square yesterday (Sunday). You couldn’t get a pushbike down the High St.

“Somebody must have leaked our plan and we must discover who spawned Squaregate.

“The council discussions centred around saving money on a traffic warden and paying lip service to those members of the public who wanted the square to become pedestrianised.

“The idea was that we would allow parking everywhere which would clog up the High Street making it impassable. Consequently, pedestrians would be able to walk around without fear of being run over and those who had availed themselves of the facility would no longer be able to moan about our exorbitant car park charges.

“Plus the savings on not recruiting a new traffic warden before Christmas meant we could put the money to better use – on a big office party for everybody at EHDC.”

Confirmation of the council’s plans merely exacerbated the feelings of anger expressed by the town’s serially-moaning shopkeeper, jeweller and haberdasher Matt Tress.

“The situation is ridiculous,” he grumbled. “How can we mere public servants earn a meagre crust if our delivery vans can’t reach us with our stock? It’s not about lost profits it’s about failing in our duty to give the public what they need.

“To make even a modest living and to maintain three mortgages and six cars I need to have a steady footfall past my shop. But the council never concerns itself with the little people.

“Won’t they please, occasionally, think of the shopkeepers?”

His sentiments were echoed by local vicar’s wife Helen Lovejoy, who added: “Won’t somebody please think of the children?”

The council spokesman confirmed that the money saved on not employing a traffic warden would now be spent on a combined Squaregate enquiry and traffic management familiarisation trip on the Caribbean island of St Lucia, over the Christmas period.

Packing his sunglasses and Speedos, the spokesman added: “We currently have no plans to change the traffic management in the square at weekends. Ask me again in the new year when I’ll feel a bit more chilled out.”